The gender of your classroom peers can have lasting earnings effects

Can school environment contribute to the gender gap in earnings? A recent study of Swedish students shows that gender of one’s schoolmates can affect subsequent earnings. More specifically, girls with more female peers tend to earn more later in life. This is likely explained by them choosing less female-dominated education and professions after school with higher earnings prospects.

Men consistently out-earn women, even in more egalitarian societies, with the gap remaining more or less constant over the last 20 years (OECD, 2021). For instance, we find that in Sweden the gender difference in earnings at the age of 30 is around 40%. This gap is not explained by differences in the education level since girls generally spend more time at school and get better grades (e.g. Lavy and Schlosser, 2011). What seems to explain the gap to a larger extent is the kind of education that boys and girls pursue and which professions they enter later. For instance, boys are significantly more likely to choose STEM subjects that are seen as having better career prospects (e.g. Osikominu & Pfeifer, 2021).

This, however, does not fully answer the question, but rather transfers it a step back: what drives those differences in choices that boys and girls make early on? One explanation that is frequently discussed is gendered socialization (e.g. Bertrand, 2011). Namely, that by being placed in environments more boys or girls, respectively, children are fostered to grow up more along the lines of what could be expected of their gender. So, for example, being in a class with more boys would push you more towards the sciences as it would be something seen as more acceptable and prestigious. In our research, we explore this hypothesis and find that the results are, if anything, contrary to what it would predict. More specifically, female students with more girls in their classroom end up earning more and actually making less gendered choices when it comes to their education and profession.

The study is based on extensive Swedish administrative data that covers all students finishing primary school (grundskola) between 1989 and 2002. In this data, we can trace the proportion of boys and girls for all students in their school environment (cohort), which is going to vary in different schools across time. We can then see how it affects what those students choose to study later on, work with, as well as how much they then earn at the age of 30. We therefore follow them for up to 15 years after they finish primary school. The rich administrative data also allows us to control for other variables that influence earnings, like socio-economic background of the parents, area of residence, and education.

The study’s results show that girls exposed to more female peers in primary school actually end up earning more at the age of 30. The difference is already noticeable with relatively small changes: adding 2 to 3 girls to the mix reduces the gender gap in earnings by approximately 3%. This result seems to be mainly driven by the kind of choices that the students make in the interim. In particular, girls with more girl peers in their cohorts consistently choose tracks with fewer women in high school and university. For example, they are more likely to opt for the natural sciences track, which typically attracts more boys. We see the same pattern when it comes to the jobs that they do later. This is largely responsible for the higher subsequent wages among those women. 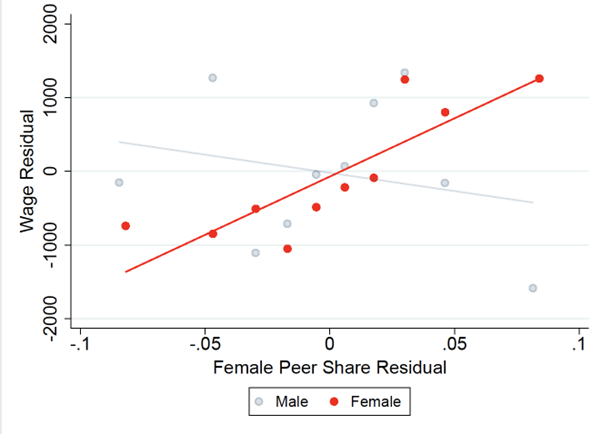 The graph shows the relationship between the proportion of girls in school and the expected earnings at the age of 30. The “residuals” for both variables show the deviation from the mean.

As with most socio-economic variables, the implications of these results are multifaceted. Firstly, we see that gendered socialization is likely not what drives the eventual differences in jobs and earnings. It is, however, quite difficult to make far-reaching recommendations based on these results. Your environment in school probably affects many more outcomes than what you choose to study or work with later. For example, in a different paper contained in a recent PhD thesis from Lund’s University Department of Economics, we show that it can also be responsible for your mental health (Getik, 2022). Therefore, any advice should be given with a fair amount of caution.

This research was undertaken as part of the author’s PhD studies at the Department of Economics at Lund University. The doctoral thesis includes three additional studies all of which build on economic experiments similar to the one described here. 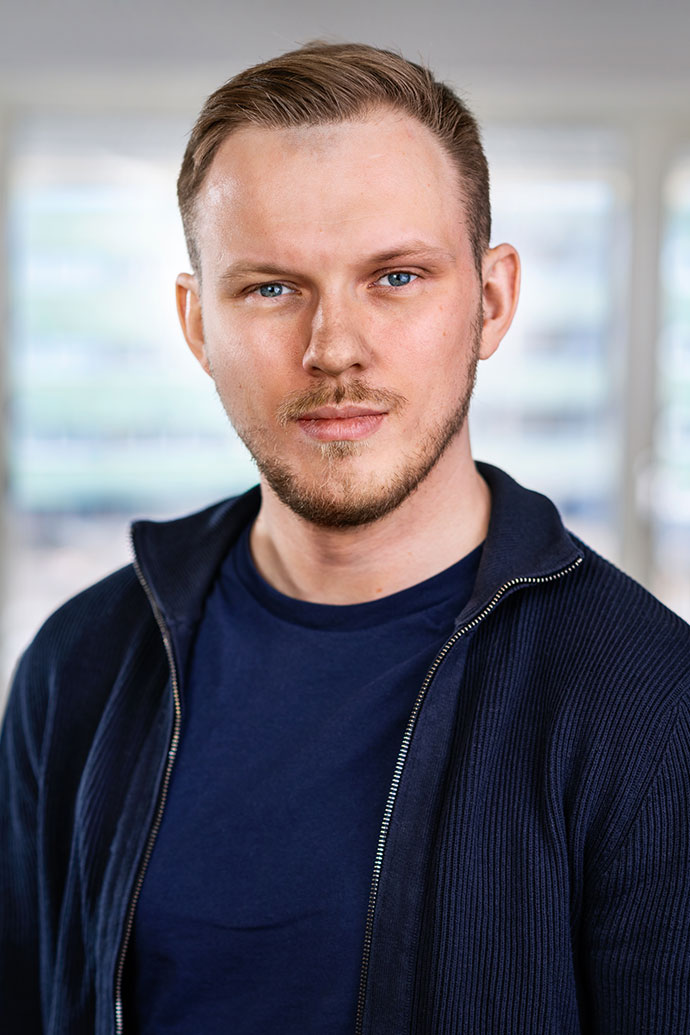