Despite improvements in some other developing regions, the gender gap in educational attainment persists in sub-Saharan Africa. If parents devote more resources to the education of their sons, then having a brother should have negative consequences for one’s own education.

The findings of a new PhD thesis show that the extent to which this is true depends on the traditional inheritance customs practiced in different societies. Specifically, the negative effect of having a brother varies according to whether customs allow inheritance to pass from fathers to son or not.

Men in sub-Saharan Africa continue to receive more education than women (Evans, Akmal and Jakiela, 2021). Devoting more resources to the education of boys will lead to gender inequalities both in society and within the household. This bias toward investing in the education of sons over daughters may be reduced if parents can make other investments in their sons, such as transferring land or other inheritances. The ability to do so, however, may depend on societal customs and traditions. The family and culture into which a child is born can therefore play a significant role in determining inequalities in education among siblings.

The study hypothesises that as boys continue to receive more education than girls, parents devote more educational resources to sons than daughters. With constrained resources, if there are greater returns to educating boys or if parents' preferences are biased toward sons, then for a given child, having a brother rather than a sister leads to a greater diversion of resources away from that child. This loss of resources reduces educational attainment, regardless of that child's gender. If parents view education and inheritance as substitutes, then for boys who can inherit property, having a brother leads to a loss of inheritance, for which parents compensate with greater educational investment, mitigating the negative effect of having a brother.

The main analysis uses data from the Demographic and Health Survey, which provides detailed and internationally comparable surveys including information on children’s education and mothers’ full birth records. With these data, the exact birth order and gender of all children in a family can be identified. Data on households from 27 sub-Saharan African countries are combined and, across the region, there exists substantial variation with regard to traditional inheritance customs of different ethnic groups. As these surveys ask mothers about their ethnicity, this variation can be measured by matching the survey data to data collected by anthropologists on ethnic groups’ customs and traditions (Murdock, 1967). The education outcomes of children in ethnic groups where sons inherit from their fathers can therefore be compared to those in ethnic groups where inheritance is passed to other relatives. Figure 1 depicts the spatial distribution of the traditional inheritance customs practiced by different ethnic groups. 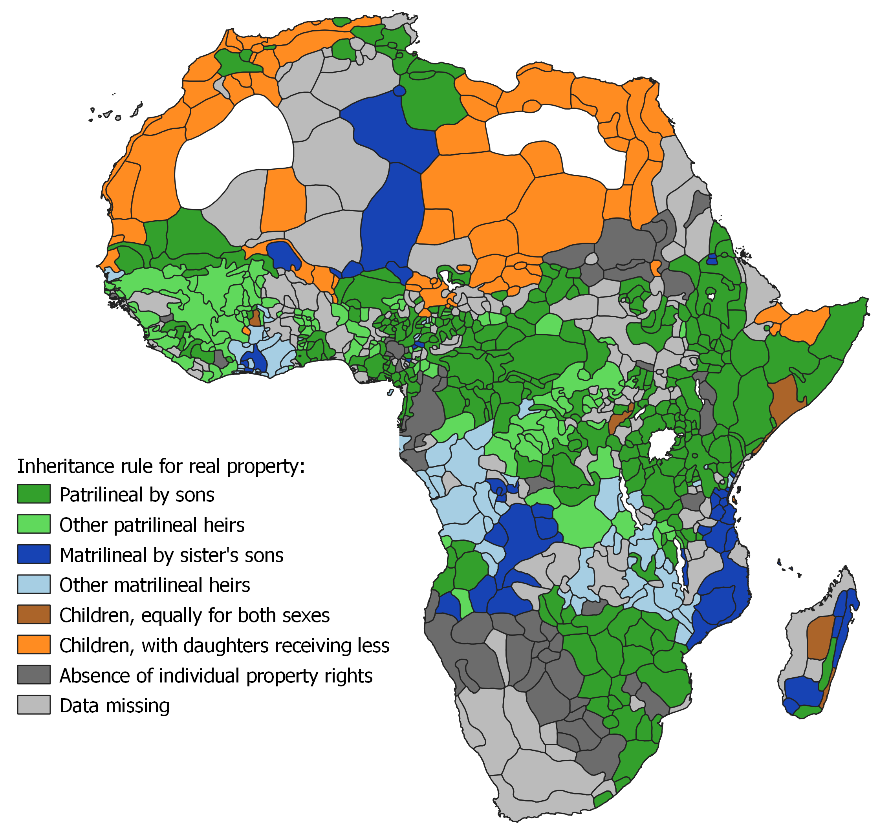 Notes: This figure is created by matching information on inheritance customs from the ethnographic atlas (Murdock, 1967) to the Murdock (1959) map of historic homelands of ethnic groups. This was done using the concordance provided by Teso (2019).

The results are consistent with the key hypothesis. For boys who can inherit property from their fathers, there is no effect of sibling gender on education. Boys who do not inherit from their father are found to experience a negative effect of having a brother of 0.094 years of schooling. For girls, however, there is a small negative effect of having a brother, regardless of inheritance customs. This may suggest that parental preferences toward investing in the education of sons still dominate even when sons can inherit. Overall, these findings are consistent with the hypothesis that parents view the transfer of property and investment in education as substitute goods in investing in the future of their offspring. Of the countries included in the study, five introduced new inheritance laws guaranteeing the inheritance of one’s property by children, regardless of gender. In support of the main hypothesis, the study shows that, after the introduction of these laws, as the ability to transfer inheritance to children is the same for all parents, the effect of having a brother converges across ethnic groups.

Furthermore, the study examines the role that education policy can play in counteracting this negative effect of having a brother. During the studied period of time, 19 countries in the sample introduced free primary education. Results show that removing primary school tuition fees reduced the negative effect of having a brother for boys who do not inherit from their fathers. This result provides notable implications for the role of policy in reducing gender inequalities. As parents choose to invest more in boys when faced with constraints over how much they can spend on education, reducing the costs allows parents to invest more equally across sons and daughters.

Overall, this research provides interesting implications for policy makers, providing evidence that cultural traditions can act as a barrier to gender equality in education within households. First, these findings establish that sibling gender has a significant impact on education and that the effects of sibling gender vary significantly according to patrilineal and matrilineal inheritance customs. The study also provides novel evidence on the power of policy to affect cultural variation in the intrahousehold allocation of resources. According to the results, removing primary school tuition fees reduces the parental investment required for children to attain an education, allowing investments to be spread more evenly across children.

More from the author

This research was undertaken as part of the author’s PhD studies at the Department of Economics at Lund University (Collins, 2022b). Other research included in the thesis examined various topics in the economics of education. One chapter examines the role in-class instruction time plays in explaining international differences in student achievement on standardised tests. The results suggest that differences in instruction time play a less important role than previously thought for explaining international gaps in student achievement.

Two chapters examine different aspects of grading in education, which plays a role in providing students with feedback on their learning as well as providing a signal of a student’s ability. One examines whether providing grades to school children on a more granular scale affects educational attainment, finding that a more granular grading scale provided a negative shock to students’ academic self-confidence, which led to worse educational attainment. The other examines how grade inflation at the university level affects the transition from education to the labour market. Grade inflation is found to result in fewer students being in full-time employment after graduation, instead being more likely to be in further study and part-time employment. Furthermore, grade inflation also leads to improved salaries for low-earning graduates.

Teso, E. (2019) The long-term effect of demographic shocks on the evolution of gender roles: Evidence from the transatlantic slave trade, Journal of the European Economic Association¸17(2): 497-534.

This research was undertaken as part of the author’s PhD studies at the Department of Economics at Lund University. Other research included in the thesis examined various topics in the economics of education.

Essays on instruction time, grades and parental investments in education 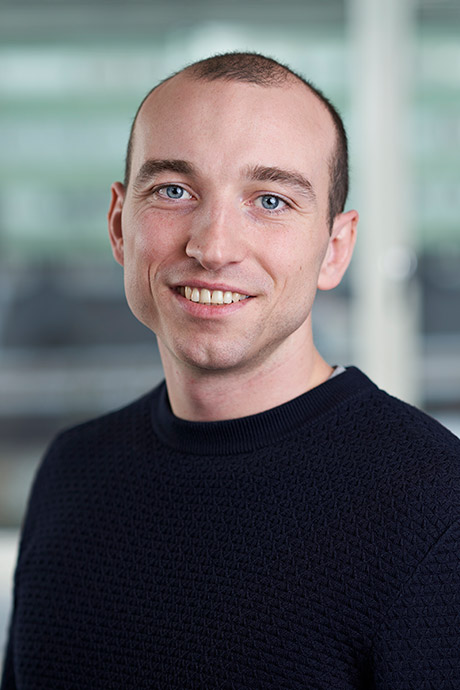