Education and research since 1666

Higher education has been taking place in Lund ever since the foundation of a studium generale in 1438, which trained future pastors. It was operational from 1438, until the Treaty of Roskilde in 1658, when Denmark lost the southern counties to Sweden. Then, in 1666, to demonstrate the re-establishment of Swedish control, Lund University was founded.

Lund University was founded on 19 December 1666, with its own charter, endowment letter and constitutions under Karl XI’s regency with Queen Hedvig Eleonora at the helm. Due to a delay in the delivery of robes and insignia to the professors, the formal inauguration took place on 28 January 1668, on the King’s name day.

The new university was named Regia Academia Carolina – The Royal Carolingian Academy. At its inception, it only had four faculties; theology, law, medicine, and philosophy. Lund University became the widespread denomination in the late 19th century.

From the first chair in economics to the digital future

The teaching of business-related subjects traces back to 1750, when the University got its first chair in economics. However, at that time, the professors usually had much broader academic fields to cover and they were often affiliated with other faculties within the university. For example, in the early days following his appointment at the university, the most well-known professor of Economics from Lund, Knut Wicksell, was professor of Economics and Fiscal Law at the Faculty of Law. Other professors combined Economics with subjects such as Botany, Mathematics or Mechanics.

In 1961, the Faculty of Business and Economics was established and the first class of 100 students was enrolled for a three year long programme. Since then, thousands of students have been educated in business and economics at Lund University.

Although there is a long history of informal ties and close co-operation between the different units, the formal development of a unified School began in the late 1980s, when the first part of the campus, the Holger Crafoord Centre, was built with generous donations from the Crafoord Foundation. The building is named after the founder of the foundation, the industrialist Holger Crafoord (1908-1982). The Holger Crafoord Centre was built in three stages during the period 1988-1998.

An organisational change in 2004 led to the establishment of the School of Economics and Management as a separate faculty in its own right at Lund University.

In 2006 the Centre for Economic Demography was awarded a unique Linnaeus grant from the Swedish Research Council securing long-term financing, and in 2011 the Knut Wicksell Centre of Financial Studies was established following a long-term VINNOVA grant. In 2014, the interdisciplinary Centre for Retail Research, involving researchers from a range of disciplines including ethnology, engineering and marketing and management was established based on a long-term grant from the Swedish Retail and Wholesale Development Council.

At present, the School is actively working on setting up the most recent focus area with the working title of Digital Future. 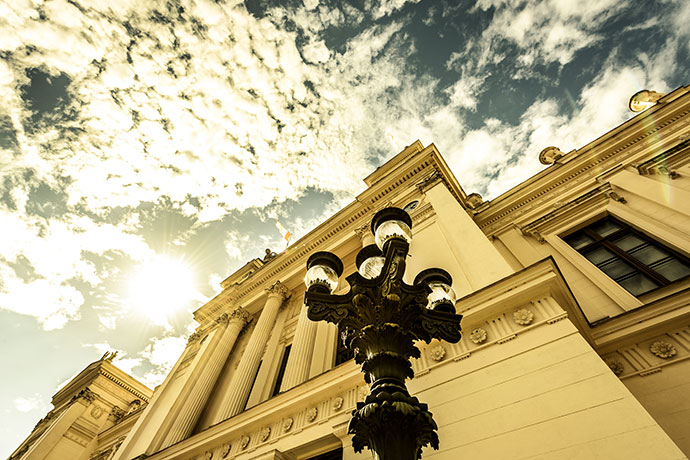 A short series on the history of Lund and its University.

Lund University has a long and vibrant history covering more than 350 years of teaching and research. Today it is one of the largest universities in Scandinavia with nine different faculties; Law, Economics and Management, Humanities and Theology, Fine and Performing Arts, Medicine, Science, Social Sciences, and Engineering.

Lund University is a member of the prestigious research-intensive university networks Universitas 21 (U21) and the League of European Research Universities (LERU).

Two of the world’s foremost research facilities for materials research and life science are established in Lund. MAX IV, inaugurated in June 2016, is the leading synchrotron radiation facility in the world.

The European research facility ESS will be the world’s most powerful neutron source when it opens for research in 2023.

MAX IV and ESS will have a major impact on future scientific and industrial development in both materials science and life science.

A brief history of Lund University