Successful entrepreneur informed by the notion that entrepreneurship is the force for good.

Sten K. Johnson was a successful entrepreneur and businessman who believed in the notion that entrepreneurship is a force for good in society. He was also a humanist with a great interest in music, who, in his spare time, played the bugle, collected Leica cameras, and listened to fiction in Morse code.
Born in 1945, Sten K. Johnson studied business administration at Lund University. After graduating in 1968 he left what he called the “gentle world of the University”, for the “harsh reality of capitalism”, and embarked on a long career within the industry and business sector of Skåne in southern Sweden.
His first job was at Trelleborg AB, a rubber manufacturing company. He then worked at Sonessons while at the same time holding the position of vice chair of the Swedish Shareholders’ Association. In 1979, he became vice president of Skåne Gripen. Sten K. Johnson has also worked as a finance consultant, and as a stock columnist at Göteborgsposten. He later became the owner of Tibia Konsult AB and eventually founded Midway Holding, a conglomerate for which he was chair of the board and director until he passed away in 2013.
Sten K. Johnson took a great interest in talented young entrepreneurs, encouraging them and their projects. He was involved in the project “Uppstart Malmö”, which strived to engage people in new entrepreneurial activities, especially in the parts of the city where unemployment levels where high. In 2012, he formed the Sten K Johnson foundation, aimed at promoting research and development in entrepreneurship, literature, music, medicine and technology.
As a former student on the Lund University Master’s programme in Business and Economics, Sten K. Johnson was closely connected to the School of Economics and Management and its activities, and in 2012 he was awarded an honorary doctorate from the University.
Sten K. Johnson believed in increased cooperation and contact between the University and the business sector, and his extensive donation of funds to the field of entrepreneurship at Lund University has enabled further development of the activities focusing on education and research within entrepreneurship.
“In the long term, I hope that there will be more and better companies emerging from academia, but also that the programme will contribute to a greater understanding of the conditions for private companies, and create interesting research results”.
Sten K. Johnson, Tidningen Entreprenör, 7 March 2012 (translated by SKJCE) 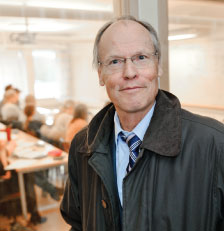 Sten K. Johnson’s involvement in the Centre has been crucial to its establishment and development.