The new version of the business plan competition Venture Cup was launched in 2013. The competitors were divided into different categories, and the winners of each categoriy in the four regional finals then competed for a place in the Swedish finals in Malmö, June 13. One team of Entrepreneurship Master's students were successful in the regional finals Venture Cup Syd.

May 17, 2013
Entrepreneurship students Joel Wealer and Raffaello Hendrickx won the People and Society category at the Venture Cup regional finals May 16 with their business idea Peer to Volunteer. They are both students of the Master's programme in Entrepreneurship at Lund University School of Economics and Management. The price sum of SEK 25 000 will be used for developing their business idea further.

Peer to Volunteer is an online platform that connects potential volunteers with organizations and projects. Through a community where people can rate and comment on different projects, users will quickly find, assess and apply for projects.

For the first time, the competitors of Venture Cup were divided into four categories: People and Society, Environment and energy, Web, software and media and Life Science and technology. From every category, a winner was chosen by a jury and awarded SEK 25 000. The jury also chose an overall winner, this year the Malmö company Photago, who received an additional SEK 100 000.

As well as the winners of the other categories, Joel and Raffaello now have the chance to compete in the Venture Cup Swedish finals in Malmö June 13. All the year’s top winners from the four regions will compete against each other for the coveted title of ”Sweden’s next success story”. 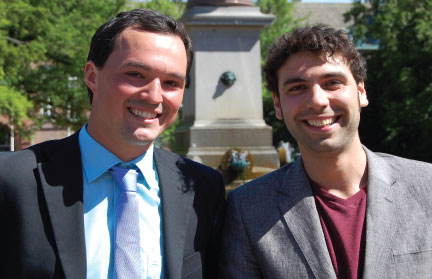