The recently established Sten K. Johnson Centre for Entrepreneurship Scholarship of 2013 was awarded to Joel Wealer and Sven Kock from the Master's programme in Entrepreneurship, for excellent academic results as well as demonstrated entrepreneurial skills.

studied the New Venture Creation track of the programme and was awarded the scholarship with the following announcement:

"for excellent academic results during the Master's programme in Entrepreneurship of 2012–2013 (track New Venture Creation) as well as demonstrated project management skills shown in the development of his business project.

Joel has shown that he has mastered broad skills in both commercial and social entrepreneurship. For his business project, he chose to be involved in RS Vision, a research based project aimed at commercializing technology developed at Lund University, but he has also been actively engaged in Peer to Volunteer, which went to the regional finals in the Venture Cup competition. Joel has during the program shown clear leadership qualities and reflective analytical skills, which has been crucial for the development of his projects."

studied the Corporate Entrepreneurship and Innovation track of the programme and was awarded the scholarship with the following announcement:

"for excellent academic results during the Master's programme in Entrepreneurship of 2012–2013 (Corporate Entrepreneurship and Innovation track) as well as for demonstrated strong analytical skills and an enterprising mindset in the development of the Internship project.

With his driving force and eagerness, he and his group member in the business development project developed and gained support for their highly valuable suggestions for how the Internship company should implement and exploit new market opportunities. His Master thesis written together with a group member has added to our knowledge about factors influencing how companies can and do make use of open innovation."

Both students were awarded a scholarship of 10.000 SEK. 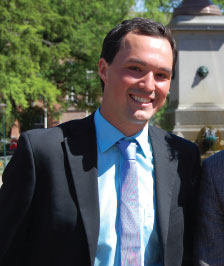 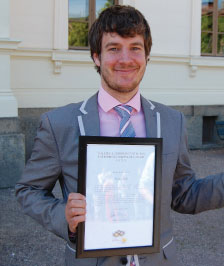